Todays post will be about our little walk in Myra Canyon! We decided to go check out this trail while we were in Kelowna. It is 12km one way, so 24km round trip. Most people bike this because walking it will take a very long time! If you do only want to do it one way, there are parking lots at both sides so you can park one vehicle where you start and another where you end! We only walked the first few kilometers though because we had other things planned that we wanted to do.

If you are just visiting and have no bikes with you, yet you want to bike this trail, they do have bike rentals available! They also have guided tours you can do, which I think would be such a good idea since there is so much history behind these tracks. Though there are little stands with information about these trestles and tracks along the trail.

The Myra Canyon trail is quite an interesting one to go to because it is a highly scenic route of the Kettle Valley Railway (KVR), which runs right on a steep-walled canyon! The trestles were originally built by hand and out of wood. There are 2 tunnels and 18 trestles on this trail that you get to walk on. Each of the trestles have a small platform off of the tracks, which is quite scary to stand on and look off but we did it!

Now the road up to this trail is gravel and quite narrow, especially when another car is coming the opposite way. What I suggest is going slow and making sure you are always paying attention! Most vehicles are able to get up there though! 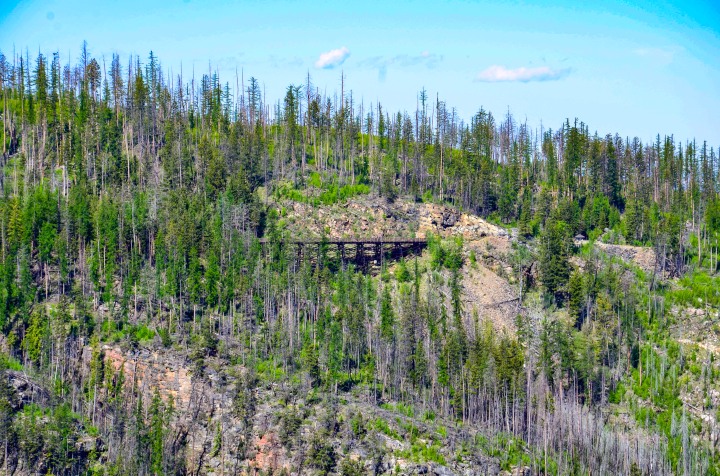 If you do want more information about the trail and the history behind it you can click here.

Hope you enjoyed the post! Let me know if you have biked the 24km round trip!