Todays post is going to be about my experience seeing Buckingham Palace in a torrential downpour! Not the best way to see it, but it was our only option!

We took the tube to get here which was an experience in itself so I will have a separate blog post on that!

To get to Buckingham Palace from the tube stop we got off at, you had to walk on a path through this massive field. Everyone was in a bit of a rush considering the weather so we made it there in a timely manner! It was incredible walking up to these golden gates – even if we were getting soaked through to the undies! I remember thinking – how in the world am I going to get any pictures in this weather?! I did not want to get my camera wet! 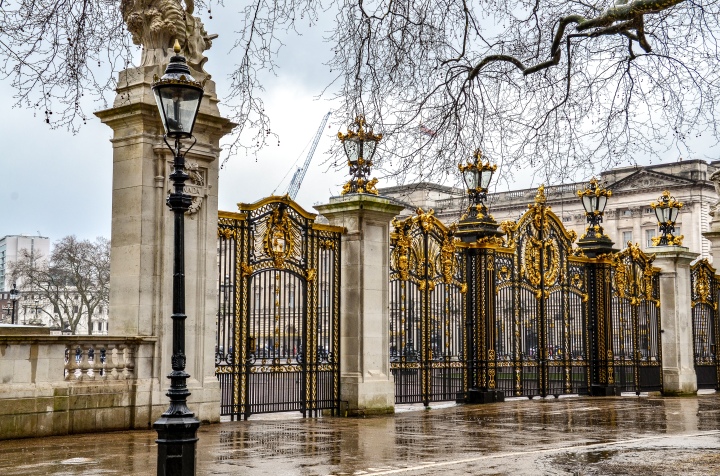 My dad and I went to this little food truck stand and I hid under the foot wide canopy by their service window trying to get some pictures. I got a few, but nothing amazing – I wanted to go get a better view! (Spoiler – you can’t get a great shot of the Buckingham Palace in a torrential downpour)

When we moved our way closer I noticed all the curtains were drawn – I do understand that for privacy, but it must be pretty dark and gloomy in there! Also, I wonder if they have updated the inside of the palace to have insulation to keep the heat inside? Otherwise it must take a lot of money to heat that place! 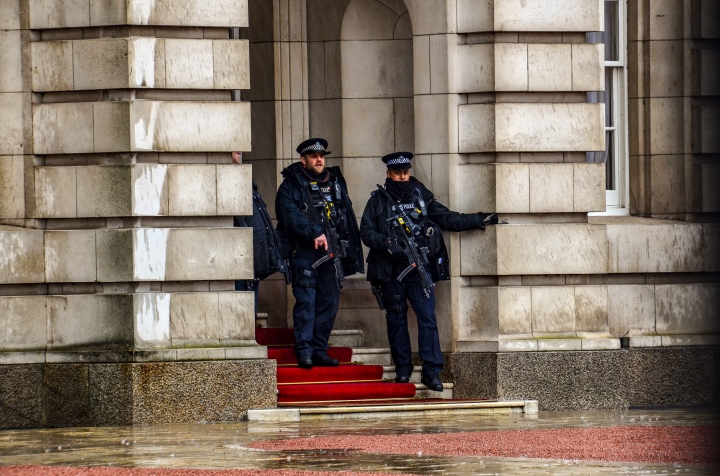 There were also guards with machine guns at every door! I knew she would have guards, but for some reason the machine guns surprised me – which they shouldn’t of! haha These guys were loaded with weapons!

Now, this is a funny one. When we were farther away my family was debating whether this guy was real or a doll haha obviously he is real but he never moved an inch so he looked fake! I felt bad for the guy because it was quite cold outside, and he can’t even moved around to warm up! He was also probably getting wet because the rain was blowing around.

I had to zoom up to the front doors because they were gorgeous! Look at all that detail and gold! I could not even imagine how much work it was to make those doors. The architecture of the Buckingham Palace was absolutely stunning.

Even the light posts surrounding the palace had gold accents! So much gold and its all kept in amazing shape too where everything else surrounding it has been grown over with moss.

Now below is the famous London Black Taxi! I heard so much about these and seen them in all the movies filmed in the UK so I wanted to capture one on camera for myself! Everyone in London said they are very overpriced so it is better to uber around or take the tube – so we did just that. However, it was still extremely cool to see them driving around the crazy traffic in London!

Have you ever been to Buckingham Palace or is it on your list of places to see? Let me know in the comments below and add in any cool facts you know about it too!